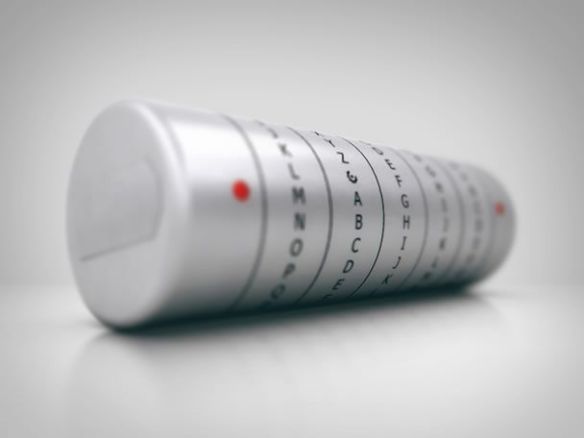 For those people who have been living under a rock for the past ten years, I have a few updates for you:

As described in Dan Brown’s The Da Vinci Code, the cryptex resembles a bicycle combination lock and features disks of stone or metal that had been “…stacked and affixed to one another within a delicate brass framework” with end caps which prevent accessing the internal chamber from either end.  Inside was a scroll of papyrus on which a secret message was written and a vial of vinegar which would shatter and subsequently dissolve the papyrus if someone tried to open the cryptex by force.  Allegedly these devices were one of Leonardo Da Vinci’s own designs, although that’s not factually true.

Fast forward to today and the design geniuses behind Crypteks (you have to love that) have created the real-world equivalent of the cryptex found in Dan Brown’s The Da Vinci Code universe.  Featuring a sleek aluminum alloy body, over 14.3 million combinations of physical security, password protection, read-only mode, and 100% 256-bit advanced encryption standard (AES) hardware encryption – the Crypteks USB drive is a fortress for your data.  The first production run is currently being funded on Kickstarter and will be available in 4 GB, 8 GB, and 16 GB models.  Data security has never been so cool.